Here Is The Big Question

That is the question.

In The Melodic Triads Study Group...
We explore them together.

⚪️ Connect with other melodic triaders from all around the world in our private, social media-style forum. No ads, no spam, no Zuckerberg

Interested in Melodic Triads but want ongoing one-on-one mentorship to help you through the process? Check out my online coaching program which includes all of the Premium resources listed above plus all Bootcamp assignments, personalized, weekly feedback on your playing, and monthly Skype lessons.

"Jordan Klemons is a great guitarist with unlimited potential. His prodigious technique is never an end in itself but instead the means to musical expression. He is a musician who looks to the past for inspiration and influence yet has a modern conception; he is someone to look out and listen for!

He has a beautiful and clear way of explaining and organizing important things related to music, jazz, and guitar. Do yourself a favor and dig into [The Melodic Triads Study Group]."

WHAT IS THE MELODIC TRIAD STUDY GROUP?

We are an online group of diverse, international jazz musicians ranging from early-stage jazz musicians all the way up to advanced gigging and teaching professionals. While most are guitar players, we do have a handful of members who play other instruments. The one thing that we all share in common is the desire to free ourselves from being stuck sounding like we're running scales, modes, chord tones, and riffs when improvising. We seek to learn to freely improvise lyrical, melodic phrases that are respectful of the chords without being imprisoned by them, and to understand how to develop lush, colorful, moving harmony beyond the bounds of drop chords.

Together, we all work on the melodic triads approach courses, meet up a few times a month on live video for open office hours where I can help answer questions and demonstrate examples to keep everyone moving forward and progressing, and hang out in our private forum where we nerd out about triads and theory, share videos of our playing, give and receive feedback, and listen to great music together.

WHAT ARE MELODIC TRIADS?

The basic idea is that all great melody is made up of resolution notes and tension notes. This is true of melody regardless of genre (bebop, modern jazz, gypsy jazz, pop, blues, rock, classical, etc). If the music is tonal, it's using melodic tension and resolution.

The triad is the perfect starting point for playing music as it naturally and organically creates an organized set of the most stable and resolved notes which we can then manipulate to create drama and tension in our melodies and harmonies. Once you experience WITH YOUR EAR the effect that adding "tension" notes against the triad has, you will never be able to un-hear this tension/resolution movement, and your ear and your improvised phrasing will forever be changed.

In our 'Intro To Melodic Triads' course I will present this idea to you, not with a lecture about theory, but with listening and giving your ear the musical experience of HEARING the emotion of different notes. Then I will offer you specific practice games you can work on to develop this way of hearing and playing in your own music. From there, we will expand outward into more advanced applications.

As we dig deeper into the approach, we look at how this concept of tension/resolution, and the movement it naturally produces, can be used to develop a more musical way of comping and creating harmonic structures and movement.

"The melodic triads approach made me realize that I was interacting with music much like a photographer looking through the lens of a camera. My perception of music had been incomplete, with parts of it out of focus. Jordan's ideas have felt as if my ears are suddenly adjusting the focus on the camera lens and my musical self is seeing clarity where there had been a sort of fuzzy concept. Elements of my improvisations that had relied on memorized patterns or ideas are now able to be approached with intention and personal choice. I highly recommend engaging and experiencing the melodic triads approach, regardless of your musical background or experience. There is something here for everyone."

WHERE DID THE MELODIC TRIADS APPROACH COME FROM?

The bulk of this method came from a year I spent studying and playing with the brilliant vibraphonist, Stefon Harris. He opened my mind to the potential and power hiding within simple triads and to the depth possible when we understand the relationship between harmony and melody.

After studying with him at the piano for about a year, I began feeling frustrated. It seemed so unfair that I could build all of these incredible, lush, and complex harmonies on the piano using triads and very simple harmonic techniques, but I couldn't access any of these sounds on the fretboard. And the only conversations about harmony on the guitar that I was hearing were either about whether we should use drop 2 voicings or drop 3, basic shell voicings, or running chord scales. I felt that there had to be a way to bridge the divide between the way I was starting to see harmony on the piano vs the conventional approach to harmony that was being taught for the guitar.

So I decided to do something about it. I spent the next year dreaming up ways of translating all of these piano ideas onto the fretboard and the Melodic Triad Approach for the guitar began taking shape.

As I started making sense of how to achieve Bill Evans-style pianistic harmony on the fretboard, I then began exploring how to translate the melodic elements over as well... relaxing the limitations and generic quality of the chord-scale theory and chord tone running approaches to improvisation. Eventually I started mixing in elements and ideas from my other teachers (John Scofield, Peter Bernstein, Kurt Rosenwinkel, Brad Shepik, and others) and my own approach started to form. At first, it was just a road map that I used. A "scientific method" that I followed during my own practice time. Having had to stop playing music for two years due to medical issues, I was forced to relearn to play the guitar. As I began to understand what this system was capable of and see how quickly and effectively the Melodic Triad Approach helped me get back to making music, I then started using it as a teaching tool when working with my private students.

As I began sharing more of my ideas with others, I was constantly being asked if there were books or DVDs I could recommend where musicians could go to learn more about the way I use triads. Since I didn't learn these ideas from a book, I had no resources to recommend. So instead, I decided to start this online study group.

"A couple of years ago I discovered a video on YouTube of Jordan playing his version of 'Body and Soul' - in his way of playing he highlighted some beautiful sounds that enchanted me! He seemed to have more than 12 notes available... it was amazing! Some time later I began to study his approach to the melodic triads in the study group and SBAM! I discovered sounds that I did not imagine I could handle. The way in which the topics are proposed is very organic and never boring! Forget the classic approach to the study of scales, arpeggios, and triads (often you end up doing only gymnastics). With the modality proposed in the course you just need a few notions to immediately start to get into the heart of the topic in a simple and rational way! In a short time I started improvising with a taste that I did not think I had! My ear has improved - I notice and recognize the use of melodic triads in the records that I hear! In short: I have acquired greater awareness and mastery of harmony and the concept of tension and resolution! I will never stop thanking you.” 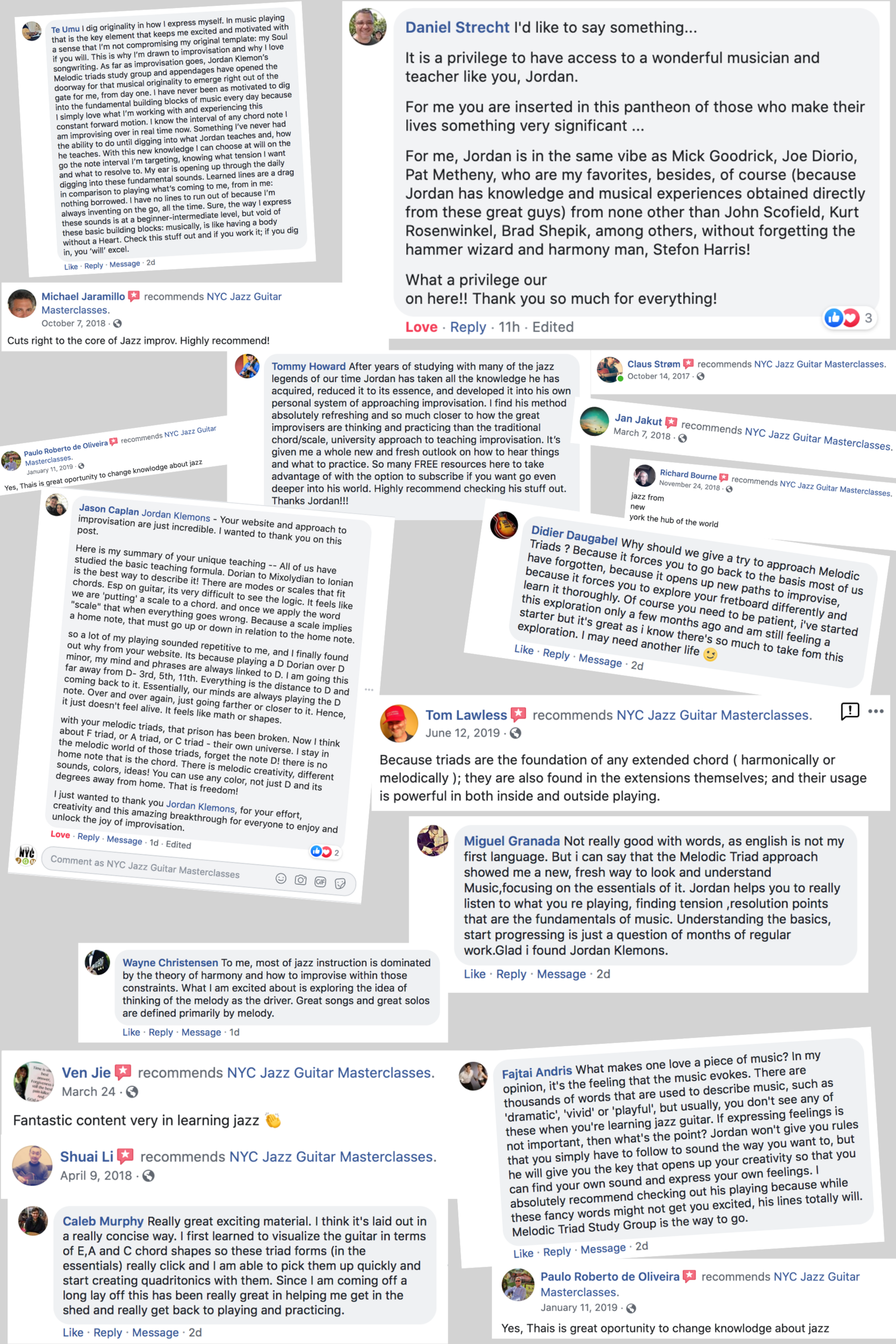 There's a famous quote that says that, "Talking about music is like dancing about architecture." I could talk and write about melodic triads forever, but the quickest way to learn about a musical concept is always to start with experiencing it through listening.

Ultimately melodic triads will sound like whatever you want them to sound like. Yes, there is a sort of "melodic triads theory" that I present in our courses and help reinforce in our study group and our live open office hours. But a lot of the value they offer is in the step-by-step approach they give us to internalize music, theory, and sound... and develop a deeper relationship with those sounds to play music in a more personal way. Whether it be melody, harmony, old school jazz, bebop, or modern.

The best way to get a feel for our approach is just to give it a shot. If this all sounds intriguing, but you're still not quite sure about it all, check out our free 'Lite Membership' to hear for what we do. It will get your ears opening up quickly, your improvisation sounding more melodic and phrase based, and it will show you how we use these simple ingredients to develop more complex and colorful improv and comping.

⚪️ Connect with other melodic triaders from all around the world in our private, social media-style forum. No ads, no spam, no Zuckerberg

Interested in Melodic Triads but want ongoing one-on-one mentorship to help you through the process? Check out my online coaching program which includes all of the Premium resources listed above plus all Bootcamp assignments, personalized, weekly feedback on your playing, and monthly Skype lessons. 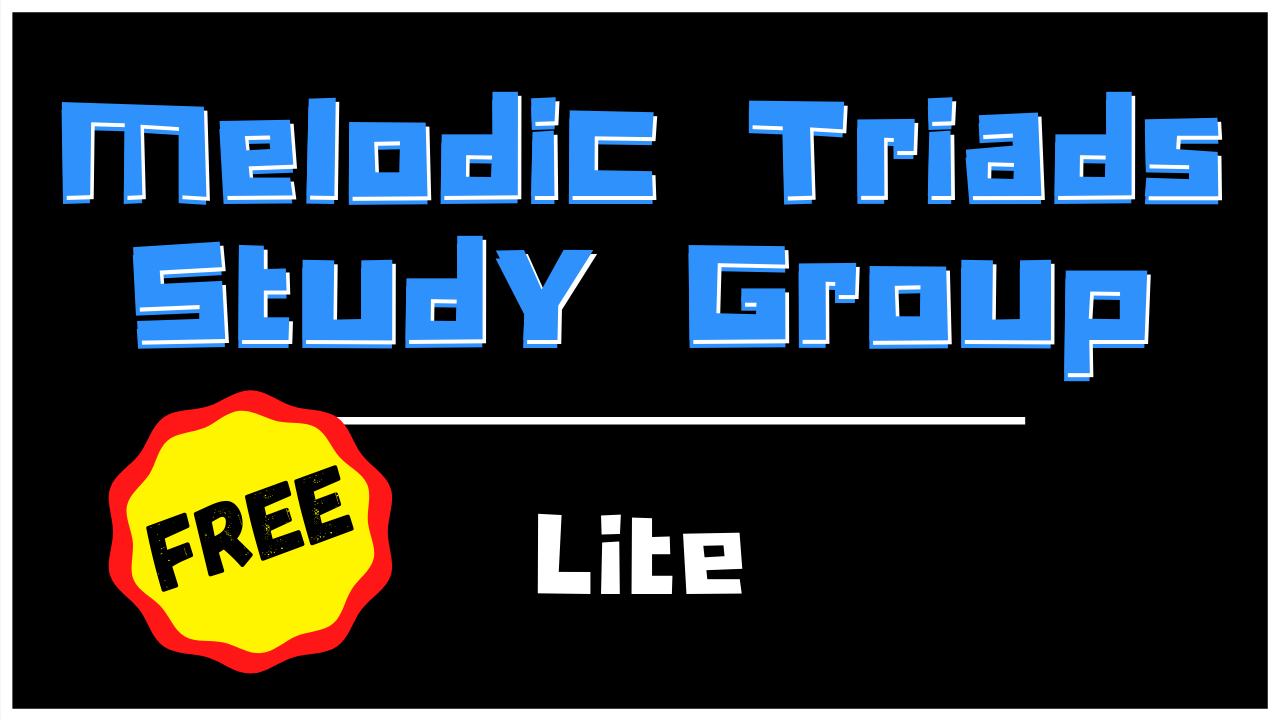 Can I give you something free before you leave?

No trial periods, no credit cards, no automatic renewals...

Take 10 Seconds To Join Our Melodic Triads 'Lite' Membership Before You Go!
Close 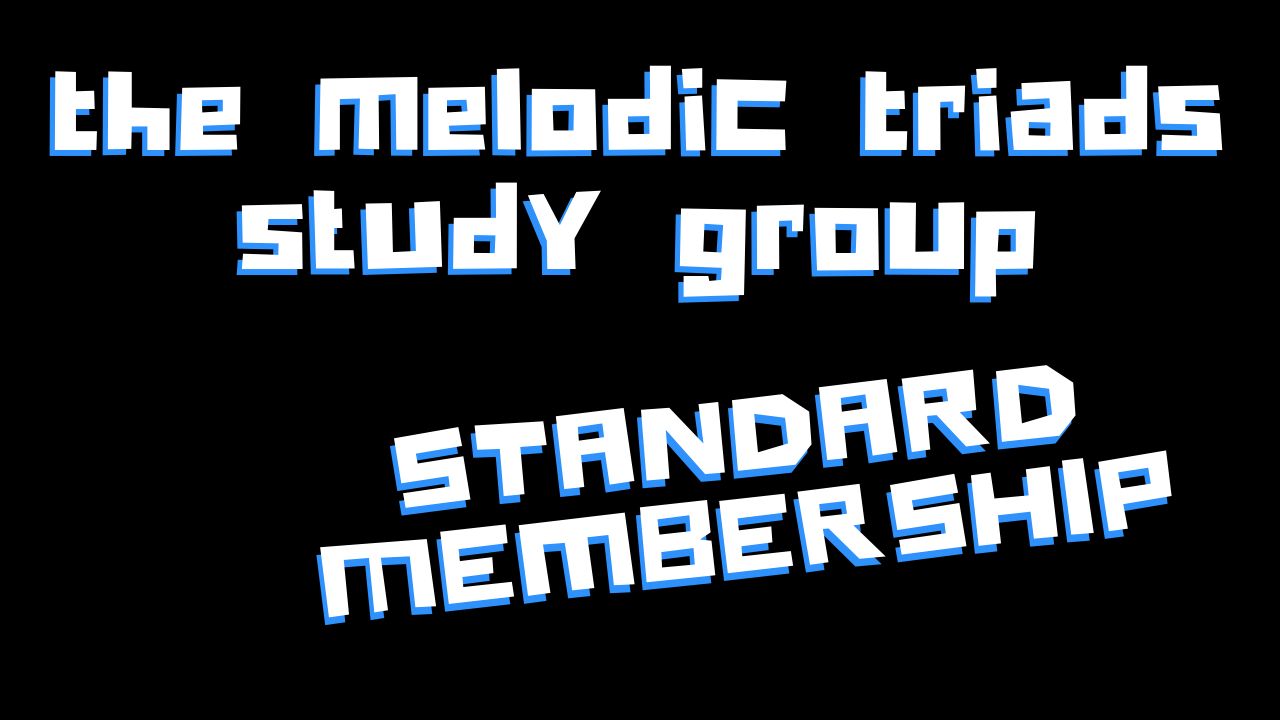 Thanks for your interest!

I will send you links every month to watch our free monthly study videos, links to join our free live open office hours session each month so you can ask me questions and get help with anything that's confusing you, the 50% discount code for our course The Overview - 5 Steps To Melodic Improvisation (which is optional and you can skip it and jump directly into our free monthly materials if you want), and other occasional specials, discounts, and related materials.

Signup below to get started...
Cheers
-Jordan

PS - Double and triple check your email. One typo, and you won't receive any emails from me.